Pets are naturally predisposed to a variety of medical conditions as their bodies and minds grow older. One common, yet often under-diagnosed condition, is cognitive dysfunction. Similar to dementia or Alzheimer’s disease in people, cognitive dysfunction is typically a slow-moving process that affects your pet’s mental function.

Let’s take a look at three pets who are displaying varying levels of cognitive dysfunction:

Taz is an elderly rat terrier who had never been still a day in his life and was determined that old age would not slow him down. He spent his days playing as much as he did when he was a pup, but no matter how much energy he burned during the day, Taz couldn’t sleep at night. Up pacing and whining all night long, Taz was exhausted by the time morning came, but he was still eager to play. However, as the days went on, his lack of sleep caught up with him, and he began to lag. When Taz became less playful and grumpy in addition to his erratic sleeping, his owner scheduled an appointment with Dr. Samon to get to the bottom of his unusual behavior.

Muffin the cat: Hot to cold

Muffin is a sweet, long-haired cat who typically enjoyed long snuggles with her human on the couch. But then Muffin completely changed her behavior. She began hissing, growling, and running at the sight of her family, and spent her days hiding and her nights caterwauling outside bedroom doors, only to dart away when they opened. Since nothing in the household had changed, Muffin’s owner was at a loss as to what could be causing such a drastic change in her darling cat’s personality, so she scheduled an appointment with Dr. McCoy.

Ryder, an intelligent border collie, is one of those dogs behind the bumper sticker, “My border collie is smarter than your honor roll student.” In fact, his owner sometimes thought Ryder was smarter than him. But, as Ryder aged, his IQ seemed to drop and he forgot how to perform half his tricks. Ryder also frequently got stuck in corners and behind furniture, and could no longer figure out which side of the door opened. Concerned about Ryder’s declining “intelligence,” his owner scheduled an appointment with Dr. Sabo.

As you can see from the above examples, cognitive dysfunction typically appears as behavior changes in pets. Common signs include:

These signs can be vague and slowly creep up on your pet, making an accurate diagnosis difficult until the disease has advanced.

How to tell if your pet has cognitive dysfunction

No simple diagnostic test that says, “Your pet has cognitive dysfunction,” is available. Rather, a diagnosis is achieved by ruling out other conditions that can affect mental function. Your Star of Texas veterinarian will perform diagnostic tests, such as a physical exam, blood work, a urinalysis, blood pressure reading, and other necessary tests to eliminate behavior-changing conditions. Pets can also experience changes in mental function and behavior if they have arthritis, a brain tumor, or an endocrine disorder, such as hypothyroidism.

How to manage your pet’s cognitive dysfunction 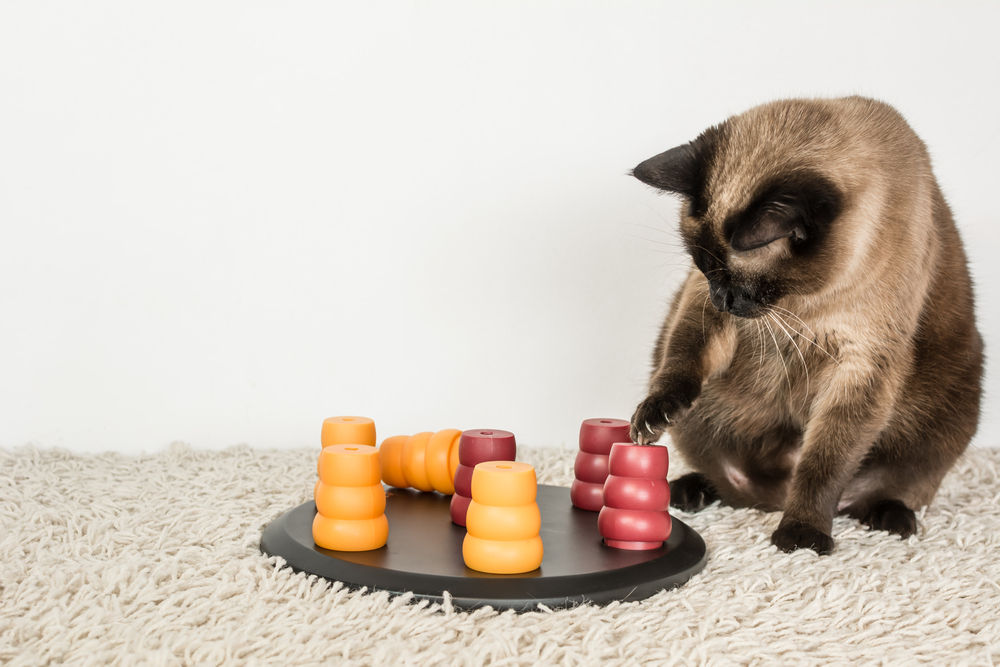 If your pet receives a clean bill of health after all the diagnostic testing, they likely have cognitive dysfunction. This is a progressive condition that requires careful management to help your pet achieve a good quality of life throughout their golden years. To help your furry pal stay mentally sharp, a multi-modal treatment plan may include:

As with all behavior conditions, no one treatment can help keep your pet’s mind in tip-top shape. Plus, behavior-modifying treatments require some trial-and-error, and take time, along with patience, before you will see a significant improvement. The best way to ward off cognitive dysfunction in your aging pet is by providing daily enrichment activities that stimulate their mind, similar to people doing crosswords.

Has your senior pet’s behavior changed? If so, they may be experiencing cognitive dysfunction. Contact your Star of Texas Veterinary Hospital team for an appointment.