What Is My Dog Saying? How to Read Canine Body Language

Learning a new language is never easy, especially from an entirely different species. While many pet owners believe they understand what their dog is saying, they often make mistakes. For example, if your dog is wagging their tail, that does not automatically mean they’re happy. It can also be a sign of high arousal, intense focus, or a precursor to a fight-or-flight response. When learning your dog’s body language, you must take into account their entire body, from their ears, eyes, and mouth, down through their posture and tail. Also, consider the scenario. If your dog is playing with a familiar friend, they are probably barking and lunging in fun, while they will take on a warning tone with a strange person or pet. Here are two scenarios to help you brush up on your canine body language reading skills.

Jasper is a spry Jack Russell terrier, known for his high-pitched bark when he sees anything of interest. When out walking, Jasper will yap at everything that moves, whether it’s a squirrel, bird, or leaf. On his daily stroll one day, Jasper saw another dog in the distance and immediately began singing the song of his people. As the dog grew closer, Jasper strained against the leash, his tiny nub held at high alert, and his barking became more frenzied. Uncertain whether Jasper would be friendly to this strange dog, his owner asked him to sit and ensured he focused on her rather than the approaching dog. With his focus on his owner, Jasper didn’t realize the other dog was close until his owner turned to continue their walk. By then, Jasper had calmed down and he greeted the other dog with an acceptable canine butt-sniffing instead of shrill yapping, and he and his new pal quickly became friends.

Although dogs, especially terriers, normally bark at new things, Jasper’s intensity worried his owner. Combined with his straining at the leash, tense body posture, and stiff tail, she was worried he would react negatively to a strange, large, approaching dog. She did everything right by taking Jasper’s focus off the new dog, which calmed him down, and he remained under his excitement threshold when he greeted the other dog. If she had allowed him to run up to a strange dog, yapping and overly excited, it could have ended poorly.

Penelope the toy poodle was a timid creature, although her gorgeous poodle coat invited much attention and petting—without permission. One beautiful afternoon, Penelope and her owner headed out to lunch at a local pet-friendly restaurant. They were seated in a quiet, out-of-the-way corner on the patio to enjoy their lunch. However, a family with three young children walked past and noticed Penelope quietly resting under the chair. Excited to see a dog, the three children rushed at Penelope without obtaining permission to approach. Terrified by the children’s exuberance, Penelope retreated against the wall, looking back at them with wide eyes, a furrowed brow, and tense lips. Her tail was tucked in tightly, and she began to shake. Thinking Penelope needed a little encouragement to socialize with the children, her owner pulled her away from the wall, leaving her unprotected with the children. Terrified, Penelope did the only thing she could to protect herself—she began growling. Unfortunately, the children ignored this clear indicator to back off and still tried to pet her. Penelope snapped, nicking one child’s hand.

This scenario is more common than you think. Many pet owners believe their dogs should accept attention from strangers, including potentially terrifying ones, like small children. However, dogs should never be forced to act as toys or stuffed animals, especially when they’re clearly warning that they’d prefer to be left alone. Penelope’s owner should have advocated for her, and kindly told the children that her dog was not feeling comfortable and should be left alone. 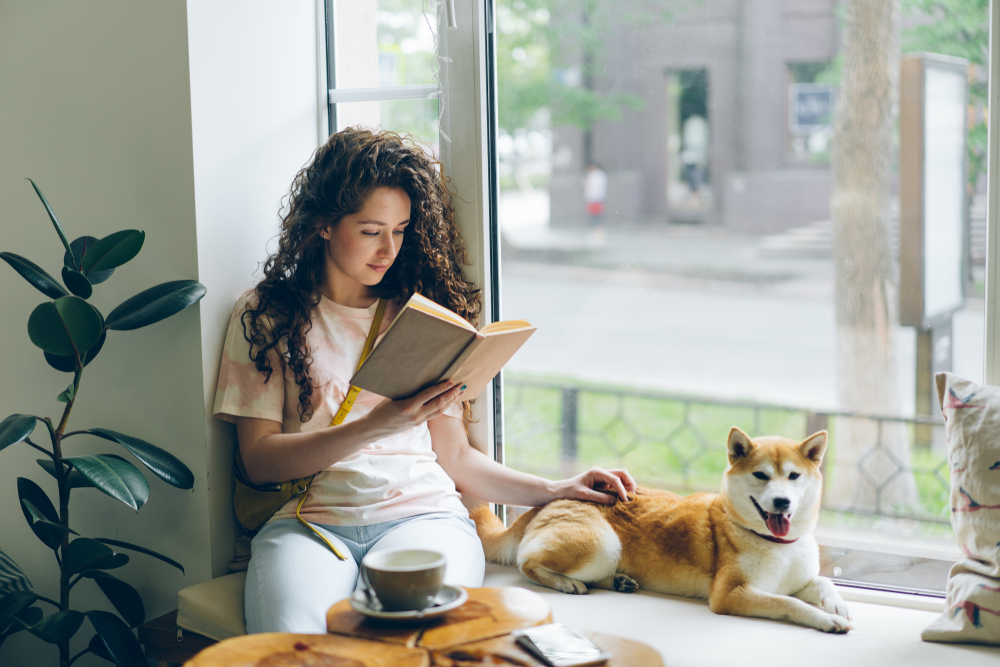 Numerous resources are available on reading your dog’s body language, but some of the most clear and in-depth resources come from pet professionals, such as Victoria Stilwell, Sophia Yin, and Karen Pryor. A dog decoding app that is fun for children and adults is also available.

You need to look at the entire picture to better understand your dog’s body language. A pup with a loose, wiggly, relaxed body in a playful, fun, or calm environment indicates they are happy, while a tense, stiff dog who is still and alert in a high-energy or emotionally charged situation can quickly go on the defensive or offensive.